News From our Treasurer, Emilie Cortes:

Four strategies that can help fuel the momentum behind investing in organizations, products, and services that benefit women.

After a decades-long outcry for data proving that gender-smart investing makes financial sense, today reams of evidence show that including women in government leads to more stable societies, educating women creates stronger communities, including women on company boards leads to better organizational performance, and access to contraceptives contributes to a stable economy.

Once viewed as a niche strategy, gender-lens investments are emerging as an important source of funding for organizations, products, and services that benefit women. According to Wharton Social Impact Initiative’s Project Sage—a landscape analysis of structured private equity, venture capital, and private debt vehicles—total capital with a gender lens cleared $2.2 billion in 2018 and is increasing. Investors are structuring portfolios and leadership teams to include the still-underserved half of the human population, and discovering that their actions are generating results beyond the bottom line.

But while gender-lens investing has enormous momentum, there is more work to do, especially in structuring organizational leadership to include all women. Here are four major themes that should be at the front of gender-lens investors’ minds in 2019.

According to the latest report by the gender-lens investment accelerator Catalyst at Large and investment advisor Veris Wealth Partners, assets under management with a gender-lens mandate grew 85 percent in the 12 months prior to July 2018, as global investors added more than $1 billion to a range of gender-smart strategies. Meanwhile, our impact investor network, Toniic, updated a T100 study of 100-percent impact portfolios and found that across 76 private portfolios, about $38 million was invested with gender lens as the primary criteria.

However, these amounts are a drop in the bucket of the overall financial system, and there remain investable opportunities across sectors, asset classes, and focus areas, including women-inclusive corporate policies, women’s leadership and capital, and products and services for women.

Ruth Shaber, a Toniic member and T100 study participant, embodies the “go for it” approach to gender-lens investing that more impact investors should embrace. Shaber is not just dipping her toe in the water; since she founded the Tara Health Foundation in 2014, she has committed 100 percent of its portfolio to identifying and supporting solutions for women’s health. The foundation actively seeks out opportunities to provide healthcare and reproductive care for women in the United States and abroad. Among its investments is Cadence Health, a startup that aims to make low-cost birth control pills available over the counter.

As gender-smart investing expands, we must make sure that the investing world’s growing focus on women does not leave behind women of color. For example, women and people of color receive only 0.2 percent of venture funding, according to a new report by #ProjectDiane. If we’re not conscious of this imbalance and the biases that have created it, we will continue to lock many people out of opportunities. We’ll also limit potential returns: A McKinsey study of more than 1,000 companies in 12 countries found that those in the bottom quartile for gender, ethnic, and cultural diversity were three times less likely to generate profits above the industry average.

A great example of innovation in this area is the female-led investment advisory firm Chordata Capital, created by Tiffany Brown and Kate Poole. Chordata Capital partners with inheritors and wealth holders to design and invest in portfolios that include an explicit commitment to racial, gender, and economic justice. Chordata helps investors direct capital toward businesses and communities led by women and people of color—for example, toward investments in credit unions or reparations loan funds in the southern United States.

To make the systemic changes we need to achieve gender equality, investors and other stakeholders must ensure that women are included in every stage of organizational decision-making. While a company may have a women’s committee or task force, for example, women’s voices won’t get heard if they are talking about issues only among themselves. And while an angel investor may fund a new technology intended to help women track their health, an all-male development team may not realize it’s impractical for women to use. Overlaying impact at the corporate level ensures that both a company’s products and its leadership team create opportunities for women to thrive.

In fact, putting women at the helm of companies is good for business overall. Catalyst at Large compiled a trove of data showing that companies with women who have a seat at the table show improved financial performance. Credit Suisse found that companies where women hold 25 percent of decision-making roles generate 4 percent higher cash flow than the overall MSCI All Country World Index, which benchmarks equity-market performance around the world. Companies where women represent half of senior management produce 10 percent higher cash flows. 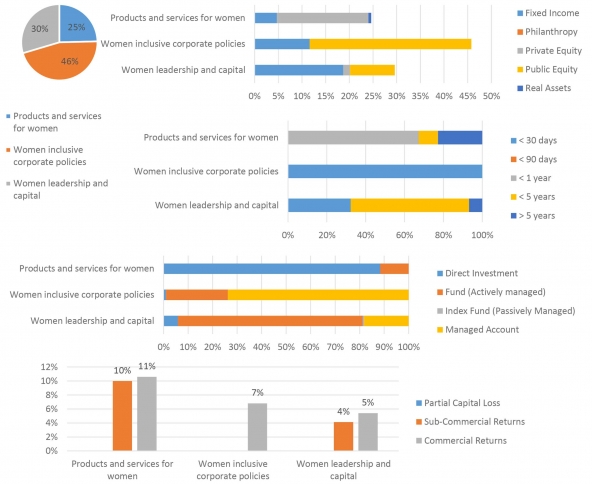 The good news is that money is flowing into companies that support women’s leadership. The Toniic study mentioned above looked at investments that correspond with the United Nations Sustainable Development Goals (SDGs). Most of the investments under SDG 5—gender equality—were in “women-inclusive corporate policies,” or investments in companies that focus on correcting gender wage inequality and unlocking the potential of female workers. All respondents expect these companies to yield commercial, market-rate returns. Investments in women’s leadership and capital came second, where investors build strategies around the expectation that women-led private companies deliver better financial results while improving gender equality.

4. Data Is Nothing Without Action

Despite all the data showing its potential, gender-lens investing is usually a side session at investing and social impact conferences—and the attendees are mostly women. For data to make a difference, everyone with investment power has to digest it and act on it.

Impact investor Suzanne Biegel—another Toniic member, and founder of both Project Sage and Catalyst at Large—hoped to nudge progress by creating the first Gender Smart Investing Summit in November 2018. The gathering brought together 300 investors from 42 countries, representing $42 trillion in assets. Participants included foundations, corporate giants like UBS and BNY Mellon, fund managers, government representatives, social leaders, and people focused on systems change—and many of these groups took action. For example, the Criterion Institute raised $7 billion in investments that address gender-based violence from delegates at the summit, contributing to its goal of raising $1 trillion. And the Overseas Private Investment Corporation (OPIC), which has committed $1 billion to invest in women in emerging markets, announced that it is applying a gender lens across its whole portfolio.

Toniic has also committed to putting gender-lens investing and racial justice center stage. Last year, we took a “no manel pledge,” promising to actively seek female speakers and avoid all-male panels at every event we organize, including at member events and conferences like SOCAP. Further, at the Compton Foundation, where I serve as treasurer, the investment committee has formally adopted an initiative to include a gender and racial justice lens across our existing portfolio and all new investments. We will also steer more grants and investments toward supporting women’s leadership.

Investing in women is not a risk—it’s an enormous opportunity to make change and enhance the well-being of half of the global community. While more capital and data are coalescing around gender-lens impact investing, there’s no need to wait for a “perfect moment” to be a part of it. The time is now, investors are already seeing the impact, and every action we take fuels momentum.